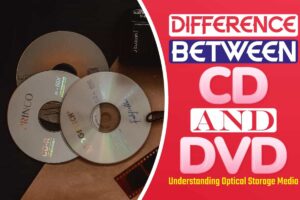 Human beings have an astonishing power to invent, and this is seen all around us. An important part of this continuous invention is storing data for later research, and this is where storage media come in.

DVDs and CDs have been a common storage option in the last few decades. They are almost similar in appearance, leading people to believe that they can be used interchangeably. Let us break them down and see which one can be used in what situation;

Difference Between CD And DVD

CDs and DVDs resemble each other in appearance, but there are many differences between the two.

It is crucial to know these differences to pick out the storage media that best suits your needs. Let us get into the details;

This means that you will have more storage space with a DVD, and it can store more files than a CD.

DVDs are either single-layered or double-layered. For a double-layered DVD, you need a special burner that supports them in writing on both layers and taking advantage of all the space. Any DVD player or CD ROM can read a DVD since it can’t be double-sided.

There is a difference in the internal design of the two disks in CDs; the recording layer is on the top of the disk.

In the DVD, this layer is in the middle of the disk, and this is why CDs are damaged more easily than DVDs; the recording surface is more exposed.

The difference in storage capacity comes from the pit arrangement on the disks. CDs have only single pit layers, while DVDs have double layers of pits.

This is how data is stored on optical disks; thus, having a double pit pattern gives more storage space.

Data on optical disks are organized in a spiral and blocks along the circumference of the disk surface.

CDs have a 1.2-micrometer space between these spirals, while DVDs have a space of 0.74 micrometers. This reduces the disk surface wastage and increases storage capabilities.

This means that DVDs come with faster speeds, convenient for the user, considering they have a larger storage capacity.

The layers of DVDs and CDs have different designs. Thus the two media vary in thickness. CDs have a thickness of 1.2 mm, while DVDs are only 0.6 mm. This is one of the aspects you can use to differentiate between the two options.

How Do CDs And DVDs Work

Compact Disk and Digital Versatile Disks were in the late 20th century, and DVDs replaced CDs. DVDs offered users more space than CDs, and they became popular and later got upgraded into Blu-Ray.

The concept of data storage is shared between CDs and DVDs with minor differences. Let us break this down and see how data is written or read off these disks;

There is a single line of data on a CD that spirals from the center of the disk throughout the circumference.

The laser that reads and wires the data will not move to follow the spiral; instead, the disk will rotate.

The mortar in your disk player will spin the disk so that the laser only needs to move towards the end of the disk. Combining these two motions will allow the laser to get to data at any point of the disk.

A disk is made of several layers, the top is the label layer, and the bottom is a plastic to protect the writing surface. In the middle, there is an Aluminum layer where the laser stores the data.

The Aluminum is not flat; if you look at it under a Microsoft, you will notice small holes called pits.  These holes are spaced, and they, therefore, form a series of pits and lands.

The laser sends out a light ray, and the sensor will detect the reflection. If the sensor doesn’t receive a light ray, the microprocessor will record it as a 0 leading to a series of 1s and 0s that your computer processes to audio or video.

This use of light technology is why DVDs and CDs are categorized under optical storage media. A computer can store any data provided it is encoded in 0s and 1s, meaning it can work with a disk.

You will notice that different parts of the CD or DVD move at different speeds depending on how far they are from the center. You can illustrate this by drawing two dots on a CD, one near the center and one at the edge.

This means that the laser would have a problem reading the data as it moves towards the edge of the disk.

This is because the laser is calibrated to operate at a specified speed. So when the data moves faster, the laser will be unable to get the data you need in time. The only way to control this is to ensure the disk rotates at a similar speed all through.

CD players are designed to compensate for this. The disk rotates at the pace of the laser; as the laser moves towards the edge of the disk, the mortar slows the rotation of the disk. This ensures the laser can comfortably read the data throughout the circumference.

All-optical disks, including Blu-ray DVDs, work the same way, but they have minor modifications to increase performance.

All in all, optical storage is a solid option for the storage of data, and it can be convenient for most users.

Tips On Caring For A CD Or DVD

CDs and DVDs have become cheap, and it won’t be a problem to replace them; the issue will be getting the data on the disks. If your disk is too damaged, you will be unable to read any data off it, which can be damaging.

To prevent data loss, you need to take good care of your CDs and DVDs. Here are some tips you could use to ensure your data is safe:

Use compressed air to clean dust from the reading surface of the CD; this will ensure you don’t accidentally scratch the surface and cause permanent damage.

If the dust clings onto the surface, you can use a soft cloth to wipe it off. You can use the same cloth as the one for glasses to ensure the fabric causes no scratches.

If there are stains on the DVD, you can wipe them off using a soft cloth and some alcohol or spirit.

For alcohol, make sure you mix with distilled water to make sure it does not end up damaging your CD.

When wiping the CD, work in straight lines from the center, moving towards the edge of the disk. Wiping in spirals could disrupt the data on the disk and mess up the playback.

Don’t bend or put heavy objects onto the disk. A lot of pressure could deform the Aluminum writing surface on your disk, making it hard for the laser and sensor to read data off it.

Keep the disk away from heat since they are made mostly of plastic and metal, both of which are affected by temperature changes.

Store the CDs correctly; you can keep them in their original boxes and use them as décor in your room for special editions.

For other CDs, please make a point of buying a CD wallet so you can keep all of them safe and organized.

CDs were first sold in 1982, and around 13 years later, they were replaced by DVDs. These two storage media operate using the same concept, and they use light technology. There are differences between them in terms of dimension and storage.

Since DVDs are upgrades of CDs, they offer better performance, higher storage capacities, and increased speed with reduced physical sizes. You need to be car3eful and take good care of your disks since they can get damaged easily. 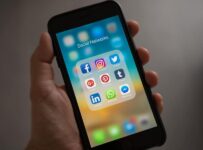